In May, we asked “What Comes After the Boom?” and took a closer look at the development of balance sheets, revenues, and allocation of resources for real estate portfolios. Today, we would like to build on that analysis and shed some light on the development of the benchmark interest rate and its effect on average interest rates in the real estate sector. Let us start out by saying that the residential real estate sector needs to actively prepare for a change in market conditions in order to avoid being doubly punished by a reversal in the trend and the associated rise in interest rates.

The European Central Bank (ECB) is in charge of setting the main refinancing operations rate (benchmark interest rate) for all countries in the eurozone. For lenders (banks) that borrow money from the central bank, this interest rate is the most important one.

Since the start of the most recent financial crisis in 2008, the ECB’s benchmark interest rate has—with a few exceptions—consistently trended downward. In January 2009, the main refinancing operations rate stood at 2.5% before being lowered successively to 0% in the years that followed. The only increases came in 2011, when persistent inflationary pressure led to two hikes of 0.25% each, bringing the benchmark rate up from 1.00% to 1.50%. But that only lasted until the end of that year, when the ECB lowered the rate to 0.75% in response to the Euro crisis. There has not been much movement since then. The rate was lowered in 2016 to the historic low of 0%, where it has stayed ever since (see Fig. 1). At the same time, the deposit rate also stands at a historic low of -0.5%. The idea is to spur banks to lend their excess liquidity into the economy (source: Bundesbank). The consequence for lenders is that they can borrow cheaply and pass along low rates when they lend to other businesses.

What this means for residential real estate firms

When these companies’ annual reports were analyzed, it became apparent that the weighted interest rate for all of them has been declining year after year since 2011 (see Fig. 1). To determine this, the interest expenditures and borrowed capital were identified from the annual financial statements and added together for each year across all the companies. The quotient, or the interest costs, was determined based on these two values for each year.

It is clear that the firms under consideration benefit from the low interest rates with some time lag. This is explained by the long credit periods used in the real estate sector’s business model, which is geared toward the long term. TAG and LEG, for example, have average credit periods of more than eight years (source: annual reports). In 2019, the weighted interest rate for these companies stood at 1.3%, giving rise to approximately EUR 1 billion in interest expenses2. It is not very likely, however, that the interest rate in the residential real estate sector will fall to 0%—although these days, nothing seems impossible.

Still, the duty of care that applies in business should force companies to also consider realistic scenarios that assume a reversal in the trend: The days of annual value increases and further sliding interest rates could be over. With this in mind, we consider two scenarios based on rising interest due to a hike in the benchmark rate. Interest could also increase if the value of existing properties falls, however. In that case, financing costs would increase due to the rising loan-to-value ratio. The calculations for both scenarios show how heavily a change in the benchmark rate would impact the profitability of the real estate sector.

Scenario 1 assumes that a change in the benchmark rate would flow through to the residential real estate sector unchanged, and that the changed interest would directly affect the entirety of the borrowed funds.

Scenario 2 assumes that the average term of these credits is ten years, with 10% of the credit volume being newly drawn on the market every year. The interest rate for this new activity is equal to the average interest plus the ECB’s benchmark rate, which forms part of the new interest rate unchanged.

Both scenarios help to better understand how market changes might affect earnings before tax (EBT) or consolidated earnings.

Effects of a rising benchmark rate on earnings before tax (EBT)

If the interest costs for loans held to maturity increase by 1% (for example due to the benchmark rate increase factored into our scenarios), the costs of new loans rise in both scenarios. In scenario 1, the increase in the interest costs alone reduces the earnings before tax by 7%. The relevant companies considered in the analysis go from paying approximately EUR 1 billion to EUR 1.7 billion in interest, so their earnings are down by EUR 0.7 billion—a significant amount.

In scenario 2 as well, the increase causes a reduction in EBT, although the decrease is more muted in the first year, at not quite 1%. If half the loans drawn are at the new interest rate, the decrease amounts to EUR 370 million (see Fig. 2).

Fig 2: Effects of a 1% increase in the benchmark interest rate in two different scenarios

On closer consideration of the consolidated earnings for this sample over the past few years, it is noticeable that a large portion of the profits reported are the product of revaluation of the properties and buildings held (investment properties). This is due to the increase in real estate prices over the past few years. Since this kind of appreciation is only imputed at first, it does not have a direct cash effect on the residential real estate sector unless the homes are sold. In 2018, this kind of appreciation accounted for nearly 80% of the consolidated earnings. The article titled "What Comes After the Boom?" considered the increases in greater detail.

The trend continued in 2019, the last fiscal year concluded, when about 77% of the profit before tax was the result of rising investment property valuations. These quasi-automatic increases could soon be a thing of the past. For example, Deutsche Wohnen had to announce significantly worse period earnings in the first half of 2020 as the growth of its existing properties’ value stalled. Half-year earnings shrank from EUR 603 million to EUR 217 million (source: Deutsche Wohnen). The new residential rent control law that took effect in Berlin on February 23, 2020, the Gesetz zur Mietenbegrenzung im Wohnungswesen, is definitely a factor here, as it has significantly impacted the Berlin core of the approximately 116,000 residential units held by Deutsche Wohnen. This is a very clear example of how quickly regulatory changes can eat up part of a company’s profit. The German federal constitutional authorities are currently reviewing the law’s validity. If the law is upheld, values may stop rising, or there may even be a downward correction, which could quickly push interest on borrowed capital up, significantly weighing on earnings. The Federal Constitutional Court’s decision will send a strong signal to the market. Depending on the outcome, it may trigger a cascade of further regulations in the residential market.

If the appreciation of investment properties (IP) is deducted from the consolidated earnings, this takes the earnings before tax (EBT) for the companies under consideration down from EUR 10.5 billion to EUR 2.4 billion—a significant decrease in stated profits (see Fig. 3). 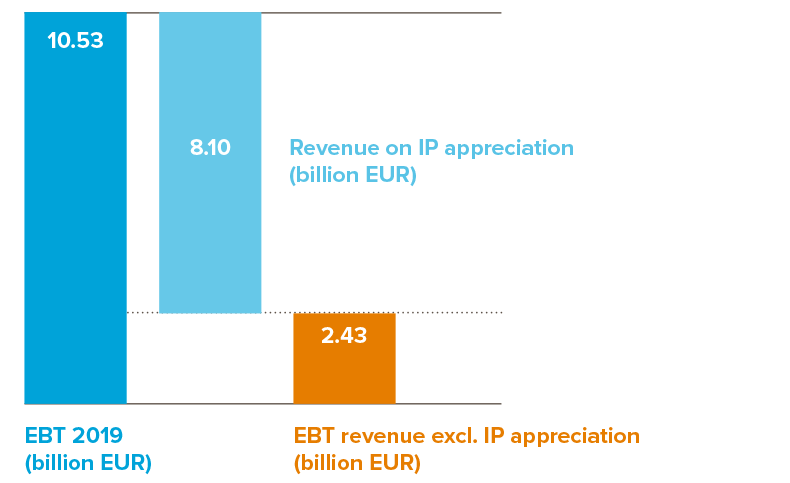 There are signs that a change in the market situation would have a significantly greater impact than apparent at first glance. Crisis situations like the current COVID-19 situation can also trigger a rapid and unexpected recession, which reduces demand for real estate. Increases in the book value of investment properties like those regularly seen in past years may soon be a thing of the past under circumstances like these. This is also associated with the possibility of interest rate hikes, creating additional drag.

If we consider the EBT without real estate appreciation in both scenarios, the changes in the interest rate are readily apparent in earnings. For example, if the benchmark rate goes up by 1%, the result in scenario 1 is a significant drop in profit, which goes from EUR 2.3 billion to EUR 1.7 billion—a 30% decrease.

In scenario 2 as well, consolidated earnings slide by 3% in the first year, and if the interest rate holds steady for five years, the decrease grows to 15% (see Fig. 4).

Fig 4: Effects of a benchmark interest rate increase of 1%

This scenario is based on a generally positive market situation without depreciation among existing properties. However, if it should become necessary to reduce the value of existing properties in the residential real estate sector, this would have even sharper effects on the operating earnings. In that case, financing costs would increase further due to the higher loan-to-value ratio—and these effects amplify each other.

In the area of financing, issuing bonds could be one way of raising funds on favorable terms. For example, Clarion Housing Group, the largest housing association in the UK, set a new record for the most favorable bond yield of any residential real estate builder on the British primary market at the start of this year. Demand was amplified by the Certified Sustainable Housing Label developed by RITTERWALD. It is the first certificate that makes a residential real estate firm’s positive impact measurable based on social and environmental criteria. The label helped the Clarion Housing Group to place a long-term bond for 350 million pounds, which was oversubscribed many times over due to strong demand on the market. The interest rate earned, 1.88%, was the record holder at the time of issuance for the British market, where interest is generally higher than on the German market. Furthermore, new (impact-driven) investors could be secured.

Alongside optimizing financing, firms should also focus on operations. For example, optimizing and digitalizing internal structures by introducing features such as tenant apps and chatbots increases efficiency and streamlines operational processes.

With this knowledge, residential real estate companies should prioritize optimizing both their financial structures and their operational business. This will be the only way to be solidly positioned for the future and prepared for possible changes in the market.

Do you have questions regarding this topic? Please contact:

1 Impairment of goodwill at Vonovia in the amount of EUR 1.9 billion was disregarded here in order to counter distortion due to one-time effects.

3 One-time expenditures resulting from early repayment penalties were disregarded in the case of Vonovia and LEG.

4 excluding a need for impairment on the part of Vonovia in the amount of EUR 1.90 billion